Scritti.luigigiussani.org is the result of a project started in 2004 to catalogue the written heritage from Fr. Luigi Giussani. The website has been online since February 2009.

In 2022, the year which marks the centenary of the Author’s birth, a first list of secondary bibliography (publications on the Author) has been made available as a tool to encourage the scientific study of the figure, thought and works of Luigi Giussani.

A complete bibliography of the publications by Luigi Giussani includes:

The website scritti.luigigiussani.org belongs to the Fraternity of Communion and Liberation, the association which owns the rights to publish the texts by Fr. Giussani.


The work to catalogue Giussani’s writings brought to light a number of idiosyncrasies in the way that the author chose to edit his work over time. We have listed the most significant examples, organized by category, below:

Multiple printings of a single text in various periodicals or books (at times, in the course of the same year, often with small editorial changes).

Because of the nature of the publications included, work was needed to verify the authorship of certain texts, specifically whether they can be attributed to Giussani. Before being posted on the website, each document is submitted to a process of comparing the various editions of the text, which, where necessary, includes comparisons with documents or transcripts of audio or video recordings held in the Archive of the Fraternity of Communion and Liberation. This meticulous work of verification makes it possible to reach a judgment regarding the authorship of each text. The results of this research are outlined in the editorial report created for each publication included in the catalogue: these pages provide information regarding the history and genesis of the text, editorial decisions made and lists the various editions published, indicating any significant differences among them and explaining, where possible, the motivation behind the changes.

The use of the citation style based on Chicago A guidelines, recognized as an authority at an international level and traditionally applied for citations in publications in the field of the Humanities, gave the editors the tools to indicate the precise level of confidence in attributing a text to an author. Three different levels were identified, indicated in the bibliographical descriptions as follows:

Over the process of cataloguing documents, a group of publications – in Italian and other languages – was identified that includes mimeographs, transcripts and booklets that often list incomplete editorial details, sometimes printed as “pro manuscripto” or accompanied by the disclaimer “text not reviewed by author,” distributed following events in which Giussani participated and often printed for the use of local groups to facilitate personal reflection within the communities of the Movement Communion and Liberation. Such documents could be ascribed to the category of gray literature.

Such materials carry a great significance in testifying to the interest in Fr. Giussani’s thought and person, as well as the spread of Communion and Liberation in Italy and abroad.

However, considering the academic scope of scritti.luigigiussani.org, the curators did not find it appropriate to include this type of documents in the author’s bibliography, which only includes those publications that have all the characteristics of an “edited publication:” a known publishing house or editorial authority, the year and place of publication, and indication of the reliability of the translation.

The bibliographic catalogue does not include publications of isolated paragraphs or short excerpts taken from texts that are present in their entirety on the site.


The texts surveyed are grouped as follows:

Italian texts have also been categorized into groups based on the date of publication:

The section presently includes the following categories of texts:

Information available for each publication


There is a report for every publication including:

Bibliographic notes: formatted using Chicago A Style, recognized as an authority at an international level and traditionally applied for citations in publications in the field of the Humanities.

Editorial history of the publication: information regarding the history and genesis of the text, editorial decisions made and lists the various editions published, indicating any significant differences among them and explaining, where possible, the motivation behind the changes.

Summary of the contents only for those books  by Luigi Giussani where full text is available.

Links to other related publications cited in the editorial history section.

Links to translations of the text consulted.

Link to the original text to refer to for the translation.

Names shows the list of people who have played a role in the editing of a work (author, translator, reviewer, editor, etc.). By selecting one of the links all the publications where a role is associated with that specific name will appear.

By clicking on a link the editorial summary for the selected publication will appear. 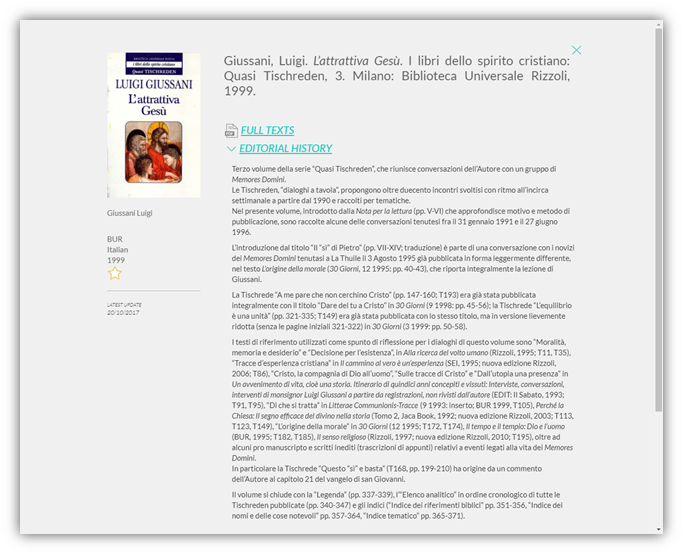 
Giussani’s writings have a broad readership, and consequently have been subject to numerous reprintings and new editions.

The full texts available on this site belong to the edition of the document which is considered as definitive. The criteria used to make this selection are:

For those publications for which full text is not available, the summary includes a link to the available edition: 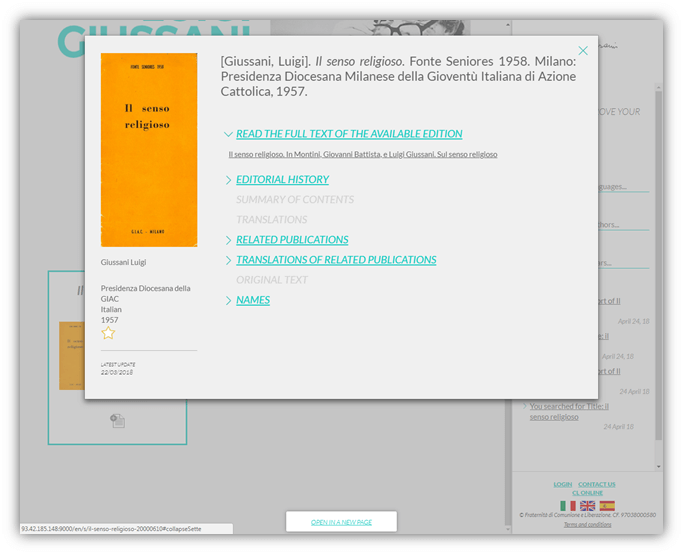